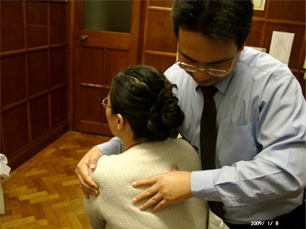 Also known as TuiNa therapy, Chinese medical massage or therapeutic massage, it has over three thousand years of history in China, where it originated. This therapy is completely safe, highly effective, and has no side effects whatsoever.

Dr Yin had been a director of TuiNa department in teaching TCM hospital for 8 years in China, not only good at treating clinical problem, but also famous for teaching TCM specially in teaching TuiNa therapy in China and abroad.

Mr W, twenty-five years old, has had three years of back pain, but it became worse one week before he came to me. He couldn’t walk without a crutch, he couldn’t sleep either because of the pain in his back, and his CT scan showed L4-5 disc prolapse which was oppressing his nerve root on the left side. He had a burning pain in his left leg and his left foot. The straight-leg-lifting test’s result was less than 20°, the tender point was located on the left side of L4-5. I performed the manipulation on his back to recover the disc and joint, and after one session of treatment the patient felt much better. He no longer had a burning pain in his left leg and foot and he didn’t need a crutch to walk, although he couldn’t yet walk long distances. I asked the patient to continue the treatment for another four sessions to make sure his back recovers fully.